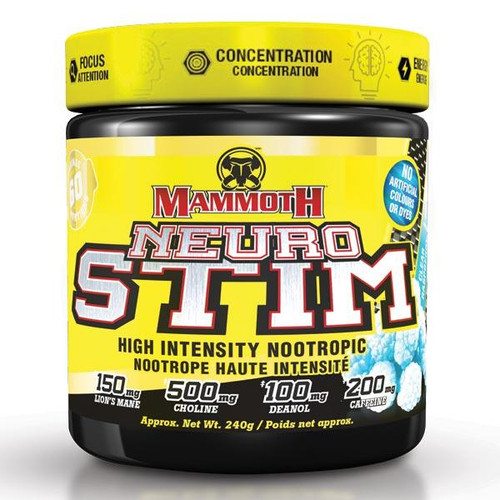 Most energy drinks are full of sugar & caffeine that will only give you quickenergy... followed by an equally quick crash.NEURO STIM does more for a lot less. Not only will NEURO STIM give you sustained crash free energy, but it will also give you increased capacity to think and feel better.

Mammoth NEURO STIM is a convenient, powerful and potent premium dosed Nootropic (Brain function support) drink mix. NEURO STIM is designed to keep you energized with laser focus and concentration to help you perform better in everything you do.

1000 mg | Glutamine
Plays a supportive role in the production and maintenance of the brain neurotransmitters Glutamate and GABA impacting cognitive function and relaxation.

500 mg | Choline
Powerful brain booster that is the precursor to the neurotransmitter Acetylcholine, which is associated with memory and concentration.

100 mcg | Huperzine A
Improves memory, faster recall and concentration by increasing Acetylcholine levels in the body.

100 mg | DMAE (Deanol)
Has antioxidant activity that is supportive to brain and neural health.

5 mg | Piperine
Intensifies the effects of the other nootropic ingredients. Slows transit time within the digestive system to maximize absorption of other ingredients in the formula.

63 mg | Theacrine
Has a similar mechanism of action to caffeine, but longer duration of effect. Increases Dopamine levels improving motivation and reducing fatigue.

150 mg | Lions Mane
A restorative ingredient that is neuroprotectant and supports memory and recall by increasing the amount of Nerve Growth Factor in the brain. (NGF - helps with the proliferation and maintenance of neurons).

Keep up with latest products and incredible SAVINGS!